Paper is available online now!
There is an increasing consensus that global species extinction rates have reached unprecedented levels. However, recent data syntheses of species trends at local spatial scales have reported mixed findings. For example, two recent data meta-analyses found that biodiversity is decreasing in some study locations and in increasing in others.  These papers argue that when averaged across all trends, there has been no net change in biodiversity at a local level, and further, suggested this pattern is representative of global biodiversity change at local scales. In order to assess the claim that these patterns are truly representative of the global trends I worked with several colleagues to re-analyze these syntheses; I provided all spatial analyses to the project. My analyses show that the datasets used in these syntheses exhibit significant spatial bias and are not representative of the spatial distribution of biodiversity on the planet, or of the main drivers of biodiversity loss.
Gonzalez, A., B.J. Cardinale, G.R.H. Allington,  J. Byrnes, F. Isbell, D.G. Brown, K. A. Endsley, M. Loreau, M.I. O’Connor, D.U. Hooper. 2016 The challenge of estimating global biodiversity pattern of local biodiversity change: A critique of recent papers finding no net loss of local diversity. Ecology. 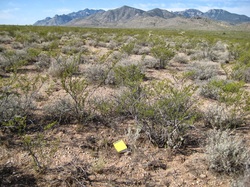 In desertified shrublands, erosion of exposed soil results in the concentration of nutrients under shrub canopies.  This pattern, known as ‘islands of fertility’, is purported to be a key factor preventing the return of perennial grasses after desertification, and is referred to frequently in the literature. However, little was known about how land use history might impact fertile island formation. I conducted the first comprehensive review and meta-analysis of the empirical literature on islands of fertility. I found that the fertile island pattern, while extremely common, was absent from all long-term ungrazed sites, suggesting that the fertile island pattern may be an artifact of grazing rather than an inherent property of arid shrublands.